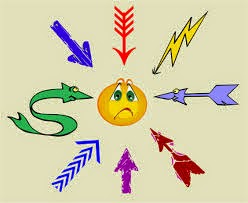 Can constant criticism ever be constructive??


This is a question that has been haunting me for a while now. Criticism can  be both constructive and helpful when the person criticizing aims for that. However if the sole aim of the person criticizing is to somehow blame you for every little thing then the game takes a really ugly turn.
It then looks more like a finger pointing exercise than a positive constructive one.


Criticism is the disapproval of people, not for having faults, but having faults different from your own.
--Unknown


Very correctly said, as we all say no one is perfect. We are in a world full of imperfections, and it is imperfections that help us to grow to discover unknown territories. To constantly criticize someone is like cursing the glass for being half full rather then having the water to quench your thirst. If we keep picking faults we will never be able to see the strengths of an individual. No two people can be the same, everyone has their own  personality. Just because someone in not like you, or the way you expect them to be you cannot disapprove them or their way of doing things.


However being  a part of a very perfectly imperfect world we cannot run or shy away from people who are good at finding faults at other. Probably they want to outshine at the cost of your self esteem.
Below are my ways to deal with negative or excessive criticism:


Learn to accept : If its your mistake accept. But make it a point to subtly state that it could have been told to you in a positive manner. Being defensive will only make you lose your credibility beyond repair. Also repetition of the same thing is not an option here. It is always best to learn from other’s mistake, but no harm in learning after you have brunt you fingers as well. So learn and remember, if you forget be ready to bear the brunt of the same.


Learn to not get affected : By now you have already know that the other person is a obsessive compulsive critic, so you need to learn to ignore. You cannot let it hamper your growth or performance. You have to become selective with the criticism coming your way. Choose  suggestions that will help you enhance your strengths and diminish your weak points. If you very seriously start implementing everything you only grow to be a clone of your critic. And mind you are not even an exact clone you are iming at being a bad version of your critic. Which is not a good thing to start with. This is what critics expect you to be thereby they stunt your growth as independent individuals.


Learn to say “NO” : As already discussed even if it is a constant criticism choose wisely and accept where it is your fault. But some where you have to draw the line and start saying “NO” where you do not agree. It is important to stop them from spreading negativity. You have to stand up for yourself and clearly state that everyone  has their own way of functioning and not always can the other person be right. Always keep in mind you progress when you target at becoming  better and not at becoming like someone.


Learn to end the chain : One wrong acceptance and the chain of these negative compulsive critical comments will continue forever. You have to somewhere put a stop to it. So be very care full and where you are not wrong do not accept. Very politely point out why you took that particular step. Learn to be more you and end the chain.


So basically be you, keep ignoring and keep learning…and always remember there is a very thin line between criticizing and bullying….never cross the same….Criticism helps build and shape leaders out of people and bullying makes rebels. Choice is yours choose who you want to deal with… progressive leaders or a regressive rebel.
Self-improvement